The term Al-Khalid tank (Urdu: الخالد ٹینک‎—Al-Xālid Ṫaiŋk, pronounced [əl-ˈxɑːlɪd̪ ʈæːŋk] lit. The Immortal Tank) and MBT-2000 refers to the jointly developed variants of a modern main battle tank by Pakistan and China during the 1990's. About 300 Al-Khalid tanks were in service with the Pakistan Army as of 2009. The Bangladesh Army ordered 44 MBT 2000 tanks in 2011. This vehicle is also used by the Royal Moroccan Army. It was trialed by the Peruvian Army for possible acquisition, but was discarded due to financial problems.

Operated by a crew of three and armed with a 125 mm smoothbore tank gun that is reloaded automatically, the tank uses a modern fire-control system integrated with night-fighting equipment and is capable of firing many types of anti-tank rounds as well as guided anti-tank missiles. The Al-Khalid is named after the 7th-century Muslim commander Khalid bin al-Walid (592-642 AD). An evolution of Chinese and Soviet tanks, the design is considerably smaller and lighter than most Western main battle tanks. It is based on the Chinese Type 90-II, which combined technologies from several Soviet and Western main battle tanks. The Al-Khalid is unusual in that it was designed to be adaptable for manufacturing, so that it can be easily integrated with a variety of foreign engines and transmissions. The current production variant of the Al-Khalid uses a diesel engine and transmission supplied by the KMDB design bureau of Ukraine. The first production models entered service with the Pakistan Army in 2001.

The Al-Khalid is a great balance between speed, health, and armor. The Al-Khalid boasts a good amount of health and a slight boost in armor which allows the vehicle to take a good amount of direct fire especially from Leclercs but its speed and maneuverability also allows the tank to escape from risky situations. The main cannon of the tank though is decent and is best used as support but can be combined with the vehicle's high survivability to overwhelm opponents. 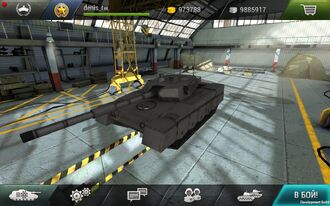 Add a photo to this gallery

Retrieved from "https://tanktastic.fandom.com/wiki/Al-Khalid?oldid=14740"
Community content is available under CC-BY-SA unless otherwise noted.